A Timeless Historic Hotel in Dublin 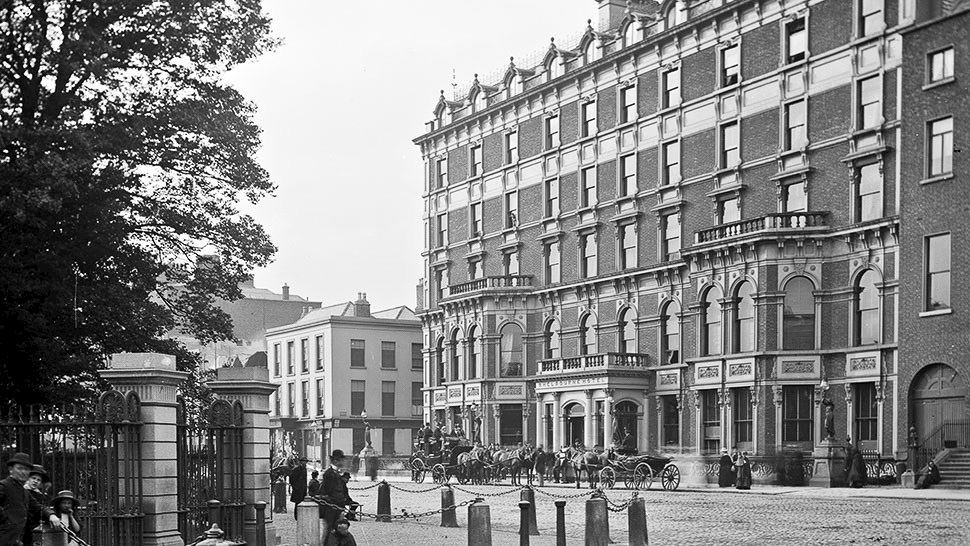 With almost two hundred years of rich history behind its genteel brick facade, The Shelbourne is a place steeped in stories. It was a Tipperary man by the name of Martin Burke who had the idea of opening a grand and fashionable hotel in one of the city's most exclusive neighbourhoods. In 1824, he leased three townhouses (Number 27, 28 and 29) on the edge of St. Stephen's Green and set out to offer the best of hospitality to the most demanding guests. The idea raised some eyebrows, but Mr. Burke, with a streak of independence and a stroke of genius, pressed on.

The Centre of Dublin Social Life

Martin Burke named his new hotel after William, 2nd Earl of Shelburne, Prime Minister of Great Britain from 1782-83, who had once owned a house on the same site. It was a subtle but shrewd way to associate the business with nobility, pedigree, and the ascendancy, and it paid off. From the beginning The Shelbourne established itself as the heart of Dublin society and a magnet for visitors from around the country and around the world. Mr. Burke's taste for innovation led him to continually devise improvements for his guests: it was the first hotel in Dublin to be lit by gaslight, and the private drawing rooms it offered were a great attraction to wealthy families who came to the city to "do the season", particularly those with an eligible daughter (or three) in town. By 1842, the great author William Thackeray had become a patron of the hotel, declaring his approval of the food, the character of the staff, and the comfort of the accommodation. The Shelbourne, he said, was "majestically conducted by clerks and other officers". Within 25 years of opening the doors for the first time, the hotel's popularity and success was so great that Mr. Burke decided to expand, adding the adjoining houses of 30 and 31 St. Stephen's Green and 12 Kildare Street. At the time of his death, in 1863, The Shelbourne was already undeniably a Dublin institution. It was sold to a consortium of Messrs Jury, Cotton and Goldman, who renovated and rebuilt the hotel to the highest standards of the day, reopening in 1867 to ever-greater popularity.

Revolution and the Constitution at The Shelbourne

In 1904, George Olden became the new General Manager of The Shelbourne. It was a prosperous time for the hotel, now running on electricity, with a telegraph office, the telephone, and a lift. International visitors flocked from around the world. Over the next decade, while political situations across Europe and in Ireland began to ferment and war broke out in 1914, the hotel continued to welcome guests and adjust to the demands of the time. The Easter Rising of 1916 was a profound moment in the history of the country, and a tense time for The Shelbourne. Loyalties in the hotel were split, and when fighting broke out on St. Stephen's Green, The Shelbourne was at the centre of the conflict. On Easter Monday, Afternoon Tea carried on as normal, until a stray bullet clipped the petals of a very surprised lady's bonnet. The ladies and their teacups were moved to the Reading Room at the rear of the hotel for safety (now the Horseshoe Bar) and hotel staff tried to carry on as normal. By Wednesday, the hotel opened its doors to receive the injured, irrespective of the side on which they fought. From February to May 1922, The Shelbourne played host to its most historic meetings: the drafting of Ireland's first Constitution. Under the chairmanship of Michael Collins, the committee met in room 112, to write the Constitution of the Irish Free State. This room is now The Constitution Suite, and contains the original table and chairs.

Throughout its history, The Shelbourne has been a gathering place for the great political, cultural, literary, and artistic figures of the time. During the Golden Age of Hollywood, the most iconic stars stage and screen spent time within its walls, including Charlie Chaplin, Greta Garbo, Laurel and Hardy, James Cagney, Clark Gable, John Wayne, Rita Hayworth, Elizabeth Taylor, Maureen O'Hara, Rock Hudson, Paul Newman and Robert Redford. In 1958, John and Jacqueline Kennedy were guests at The Shelbourne. JFK stayed again during an official visit in June 1963 as President of the United States. Princess Grace and Prince Rainier of Monaco were frequent guests, and one suite in particular was such a favourite of the erstwhile Grace Kelly that it was eventually renamed in her honour. The famous Horseshoe Bar was the legendary watering hole of many of Ireland's most distinguished authors, poets, and playwrights, including Brendan Behan, Brian Friel, Seamus Heaney and many more. Musicians have congregated here too, including icons as varied as The Rolling Stones and Luciano Pavarotti. One of the country's most celebrated groups, The Chieftains, was formed here at The Shelbourne during a session one night. It is not a simple thing to fit the history of the Shelbourne into a few hundred words, when entire books have been devoted to chronicling its most important moments. There are nearly two centuries of stories contained under the roof of The Shelbourne, and new chapters are being written every day. One thing is clear: the vision of Martin Burke, which brought The Shelbourne into being, has sustained its character ever since. The Shelbourne always has been, and always will be, a place where its guests will find an authentic welcome, profound comfort, and the very best of everything.
Shelbourne's Newsletter
email-sign up offersSign Up